Why disaster recovery is so slow in North Carolina

By: spencerbaldwin
In: Politics, State news, State politics
With: 0 Comments

Longleaf Politics | Hurricane Matthew struck eastern North Carolina on October 9, 2016.
A full 18 months later, some of the first federally funded repairs are slated to begin this June.
Hurricane Matthew has re-emerged as a political issue in Raleigh as thousands of people in eastern North Carolina await public money to rebuild.
The storm was one of the most devastating in North Carolina’s history, killing 31 people and caused more than $4.8 billion in damage. Matthew set rainfall records in 17 counties, and 2,300 people were rescued from floodwaters.
Why is recovery taking so long?
It mostly has to do with the processes set up to distribute the roughly $1.7 billion in recovery aid expected from the federal and state government.
While the initial response from the N.C. National Guard and FEMA came quickly, North Carolina has been in no hurry to distribute money intended for longer-term recovery.
And as it turns out, there’s a huge difference between money that’s been approved — and money that’s actually been used.
The breakdown of funding sources is an alphabet soup of agencies, each with its own policies and mechanisms and hoops to jump through. State governments have incentives to get roads repaired quickly. Homes, not so much.
Here’s a quick explanation of how disaster recovery works. It’s ordered by how quickly money has been distributed. 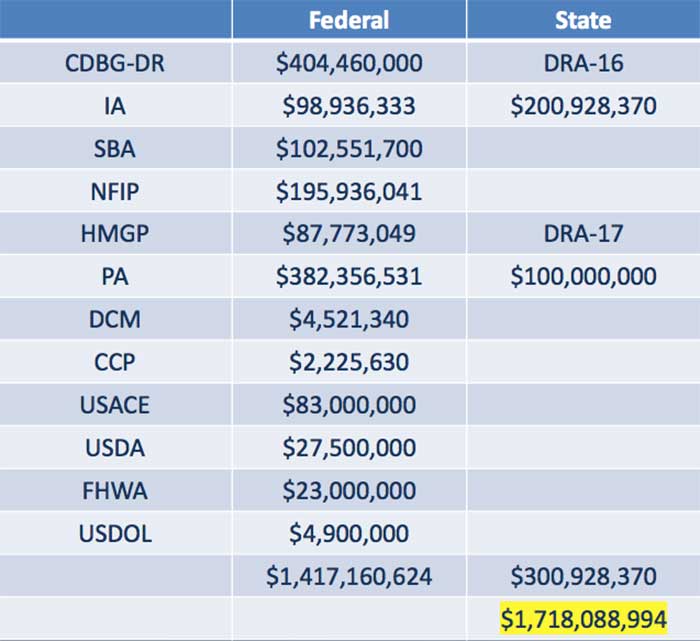