Sun Journal gets a new ad director, but you wouldn’t know it from its story online

By: spencerbaldwin
In: New Bern, New Bern business and commerce, News Media
Tagged: What the ...
With: 1 Comment 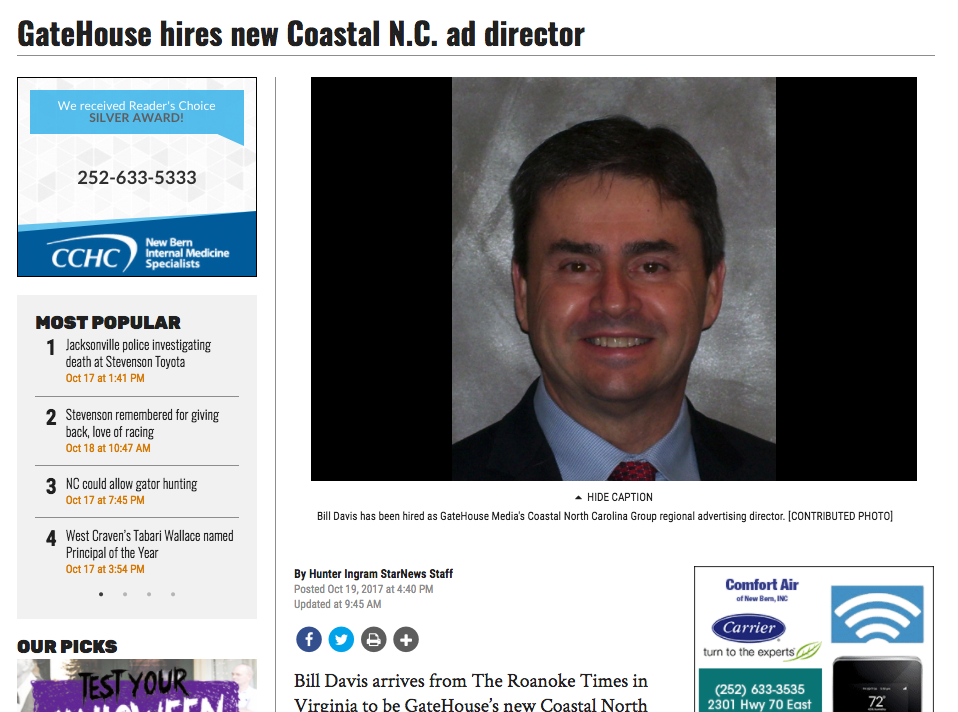 The Sun Journal has a new advertising director, but you probably wouldn’t know that from reading the Sun Journal’s own article, here. (Note: The Sun Journal updated the linked article to make it more locally relevant.)
The Sun Journal has a new executive editor, but you probably wouldn’t know from the Sun Journal’s own article, here, that his position is interim or why he is replacing me at the job.
Newspapers pride themselves in covering local news, but when it comes to covering themselves, it’s hit and miss.
Part of it is that journalists don’t like to write about themselves, even if the news is positive.
Part of it is that the corporations that own newspapers want to control the message, especially if the news is negative.
These two reasons are not new. What is fairly new, however, is the technology newspapers use to share information between themselves for public distribution.
Let’s take them one at a time.
First, about the journalists. Reporters are trained from the start to be dispassionate about the topics they cover and avoid as much as possible putting their own voice into the story. You may notice that journalists covering events rarely applaud, for example. This dispassion is so ingrained in journalists, especially veteran journalists, that when a story about the newspaper itself needs to be assigned, it is seen as dirty duty.
Then there are the corporations. In the case of the story about my replacement at the Sun Journal, it reports that there will be a new leader in the New Bern and Kinston newsrooms and that he will replace me. It doesn’t say why I left or when (pretty basic facts to leave out, journalistically speaking). The reason that information was left out was because I left for personal and professional reasons spelled out in a lengthy resignation letter that Sun Journal and GateHouse managers would rather you not know about.
Finally, the technology, which explains what went wrong with the story about the new ad manager.
The Sun Journal and its sister papers in Kinston and Jacksonville, more and more, are being led from the regional office at StarNews Media in Wilmington. That’s where the publisher (the overall boss), the senior editor, the HR director, the circulation manager … and now the advertising director … are all based. (See comments below for an opposing viewpoint from GateHouse’s Coastal North Carolina regional circulation director, Don Wilson.)
At the same time, due to diminished staff sizes in the local offices, there is more and more sharing of content between the four newspapers.
The StarNews of Wilmington did a story about the new regional advertising director, but the reporter who wrote the story and the editor who checked the story and posted it online weren’t really thinking that it was going to be seen by readers in New Bern, Kinston and Jacksonville. It would have been an easy fix, revising a sentence or two, but Wilmington is the dominant paper of the four dailies and readers in New Bern, Kinston and Jacksonville are not high priorities.
That wouldn’t be all that big an issue were it not for the fact that the StarNews article was posted to all four dailies at the same time.
What the article lacked in its first version and still lacks is the information that Sun Journal ad director Terry Tokie left her position some months ago and was replaced by Jacksonville-based ad director Ken Warren, and that the new Wilmington-based ad director is now over Ken Warren.
Moving forward, you may notice a lot of news about Kinston, Jacksonville and Wilmington on the New Bern Sun Journal website, with a lot less news about New Bern. It’s a combination of shared stories, and smaller news staffs.
The solution is in your hands. The Sun Journal, which already is arguably the second largest of the four dailies (Randy’s comment: note my use of the word “arguably” and see Don Wilson’s comment about circulation, below), will not get better by readers quitting their subscriptions and businesses cancelling their advertising. If you value having a daily newspaper in New Bern, you need to support the one we have, even if it is owned by a corporation that is more focused on quarterly dividend checks than it is on keeping century old community institutions like the Sun Journal strong and healthy.

2017-10-20
Previous Post: Martin Marietta Park to be city’s largest and could include amphitheater
Next Post: Oct. 24 Board of Aldermen agenda (expanded, annotated and updated)