Treachery on a side street

By: spencerbaldwin
In: Aldermen, Board of Aldermen, Community, Craven Community College, Economy and Employment, Mayor, New Bern, Parks and Recreation, Planning and Zoning
With: 0 Comments 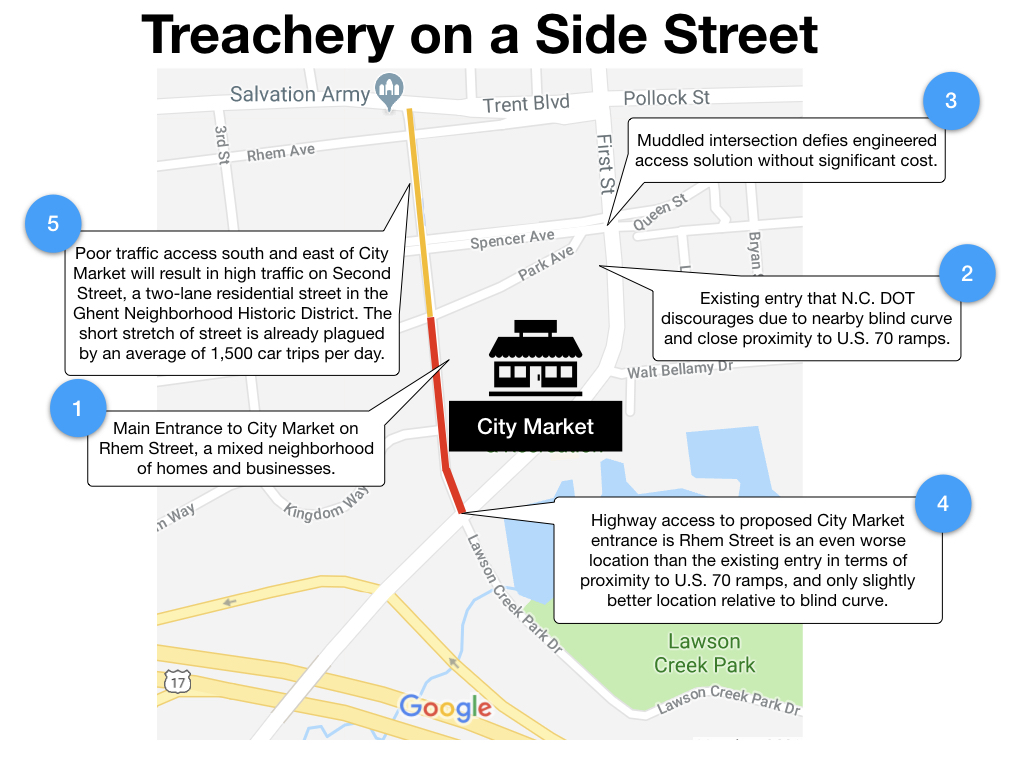 For companion story, click here
City Market is a triangular piece of property, with the Ghent neighborhood on one side, a mixed residential-commercial street on one side, and Country Club Road/First Street on the remaining side.
City Hall is giving that section of the city a lot of love and attention recently. Lawson Creek Park is right there and has benefited from a lot of improvements: a reconfigured and beautified entrance, a ball field, and more.
The city moved its Parks and Recreation offices to a building off Country Club Road, and is seeking funding to improve boat access there.
And it has worked with the state to reconfigure Country Club Road/First Street from four ugly, unsafe, ugly lanes of traffic, to two beautiful, safe, beautiful lanes of traffic with a center turn lane, bike lanes on both sides, and broad sidewalks stretching from Broad Street/Neuse Boulevard all the way to Pembroke Avenue.
Because that stretch of street is actually part of N.C. Highway 55, the state is paying for the improvements with a couple of small conditions: the city has to take care of moving street side utilities, for example. Oh, and the city can’t put the entrance to City Market on First Street.
Seems like a pretty small thing for the state to worry about, but the reasoning is sound: the entrance would be close to a blind curve and too close to the onramps and offramps at U.S. 70.
That means the entrance to City Market will have to be behind it, on Rhem Street (not to be confused with nearby Rhem Avenue).
Shouldn’t be a problem. The city gas station is there, but it is going to move it.
But if state Department of Transportation engineers take a close look at what the city has in mind, they’ll find that it’s a much worse option than a City Market entrance on First Street.
Rhem Street and the entrance to Lawson Creek Park form a four-way intersection with Country Club Road. There’s that same blind curve that DOT was worried about in one direction, and it’s even closer to the U.S. 70 offramps and onramps than a First Street entrance to City Market.
With traffic throttled from four lanes to two lanes after the street is reconfigured, traffic at that intersection is going to get very cosy. Many motorists will opt to reach City Market from the other direction, turning on to Second Street from Trent Boulevard.
Oh, but wait. Second Street is where Ghent Neighborhood residents have been complaining about heavy traffic (an average of 1,500 cars per day on a four-block, two-lane residential street). Full disclosure: I live off Second Street.
Second Street is an example an exasperated City Manager Mark Stephans sidesteps by pointing to all the things the city — no, he himself — has done for the Ghent neighborhood to address speeders on Spencer Avenue. (Ignoring complaints about speeders on Park Avenue.)
Referring to Second Street, Stephans said the city has moved its warehouse and will be moving its filling station, so that should be enough to satisfy the Ghent neighborhood. He says it as if they have gone to so much trouble, but they were doing it anyway.
What he’s not saying, and this is where “sneaky and underhanded” comes in, is that Second Street at Trent Boulevard is going to become a major access point to City Market.
Now let’s put this in perspective. If a private company were to propose putting a high-use business where the city plans to put City Market, say a hotel, the city planning department would be all over the developer to deal with traffic issues.
But the city is not a private company. It is free to ignore any issues its projects cause on surrounding properties.
This is why we can’t have nice things.
I’ve been wondering for some time why City Hall is so resistant to solving the high traffic problem on Second Street. When Alderman Sabrina Bengel suggested that Second Street be blocked at Trent Boulevard, city staff dug in its heels.
Whatever reasons city officials give against closing Second Street or reconfiguring it to reduce traffic, the real reason has been lurking in the dark for well over a year.
City Hall doesn’t want to decrease traffic from 1,500 cars a day. City Hall wants to increase traffic even further.