By: spencerbaldwin
In: April Fools
With: 0 Comments 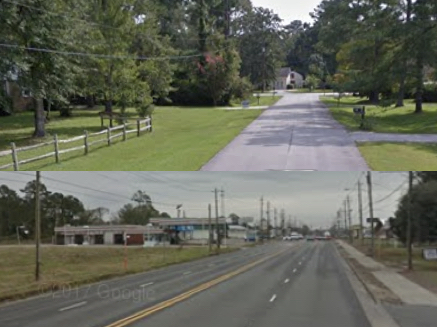 Substandard streets: City officials identified a lack of curbs, gutters and sidewalks as one thing a redevelopment plan will address in Trent Woods. This image shows before (top) and after (bottom) concepts for streets in Trent Woods. (Google Street View images)

City of New Bern officials late Friday released a sketch of their plans for a Redevelopment Agency, with Trent Woods identified as a blighted area that will most benefit from the project.
Trent Woods was targeted for redevelopment because it lacks ethnic and economic diversity, as well as having no commercial area.
“Get a good look at Trent Woods, because it’s going to look a lot different 10 years from now,” New Bern’s new Redevelopment Agency announced in a news release on Friday.
“Where there now exists row upon row of cookie cutter houses on streets without curbs, gutters or sidewalks, envision new strip malls, storage units and self-service car washes.
“This will truly be transformational,” the release stated.
Two big components of the redevelopment project will be to convert all intersections in Trent Woods into traffic circles, and reconfigure every street, even unstriped residential streets and cul de sacs, into “road diet” streets of two traffic lanes, a center turn lane, bike paths and sidewalks.
Other components of the plan is to convert New Bern Country Club into a miniature golf and video arcade venue, and Country Club Road into a commercial district.
City officials admit their targeting Trent Woods rather than a portion actually within New Bern city limits was a curve ball.
“We’ve been eyeing Trent Woods since before it was incorporated as an independent municipality a half century ago,” a city official said. “We have been unable to persuade Trent Woods to do the sensible thing, so by using a redevelopment agency, we’ll be able to condemn every single property through eminent domain and just take ownership of the place.
“It’s a win-win,” the official said.

2018-04-01
Previous Post: Scammers call trying to collect on city electric bills
Next Post: Board of Aldermen April 10 agenda, with links