By: Randy Foster
In: Craven County, Health
With: 2 Comments

UPDATED AND REVISED WITH NEW INFORMATION: A source informed me of some details off the record, so I am almost as limited in what I can say as officials are. I can say that the initial exposure likely occurred outside Craven County and was work-related. It spread among family and friends due to a close family and social structure. It was not due to a protest, concert, or party.

The number of Craven County’s laboratory-confirmed novel coronavirus cases increased by 13 over the past 24 hours, bringing the total to 93, according to the Craven County Health Department.

All 13 new cases were traced back to a cluster of family, friends, and co-workers. The total count is 38 — so far.

It appears that the majority of the cases in that cluster reside in the 28562 ZIP code, which includes west New Bern, Trent Woods, River Bend, and the U.S. 17 corridor to the Jones County line.

On Friday, the Craven County Health Department released its weekly demographic report of COVID-19 cases, but the report did not include race or ethnicity.

Over the past three weeks, several interesting changes emerged in the nature of COVID-19 cases in Craven County compared to the first report that was issued:

It is important to bear in mind that the cluster that emerged earlier this week accounted for a 30 percent increase in the total number of cases in Craven County. Such a significant number attributed to one cluster makes it easier to draw conclusions based on previously available data.

You can conclude that the cluster included younger and middle-age adults, and possibly children but few or no older adults.

In initial reporting, the Health Department reported 14 cases in the cluster, with an additional 10 the next day and one the following day. The cluster was first described as family and friends, but later expanded to include co-workers.

Because the Health Department did not release race and ethnicity data, it is impossible to determine what impact the cluster had on those percentages in Craven County.

The earlier report showed that 61 percent of Craven County’s COVID-19 cases were black or African American, 39 percent were white, and 3% were Hispanic.

*Rates are calculated using population estimates from the US Census Bureau

When using the NCDHHS COVID-19 site to stay up to date, please keep in mind that county case numbers may change once residency is verified. Therefore, the total number on the county map may differ from the number of Craven County Cases. 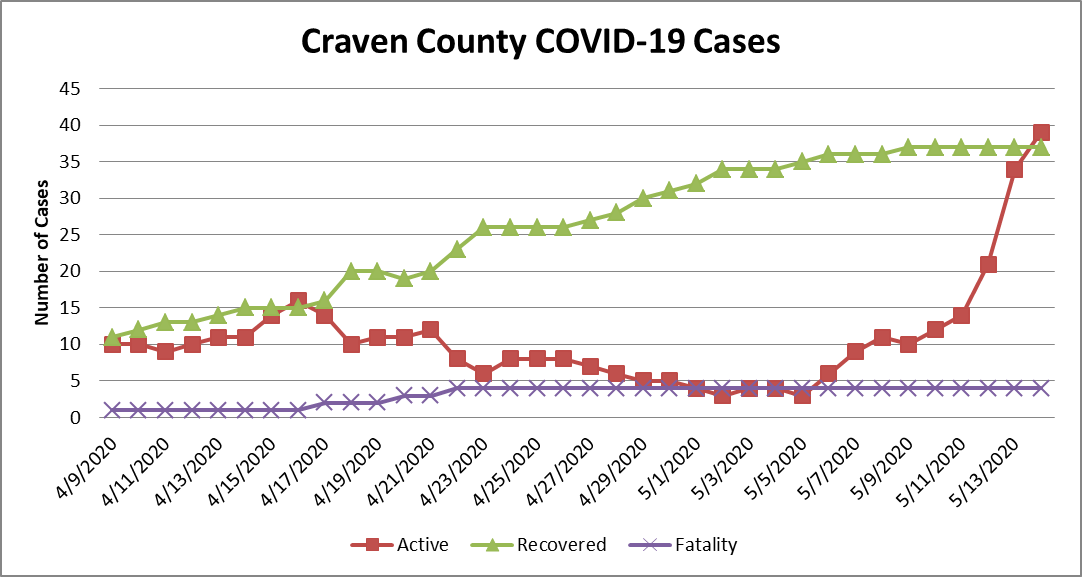 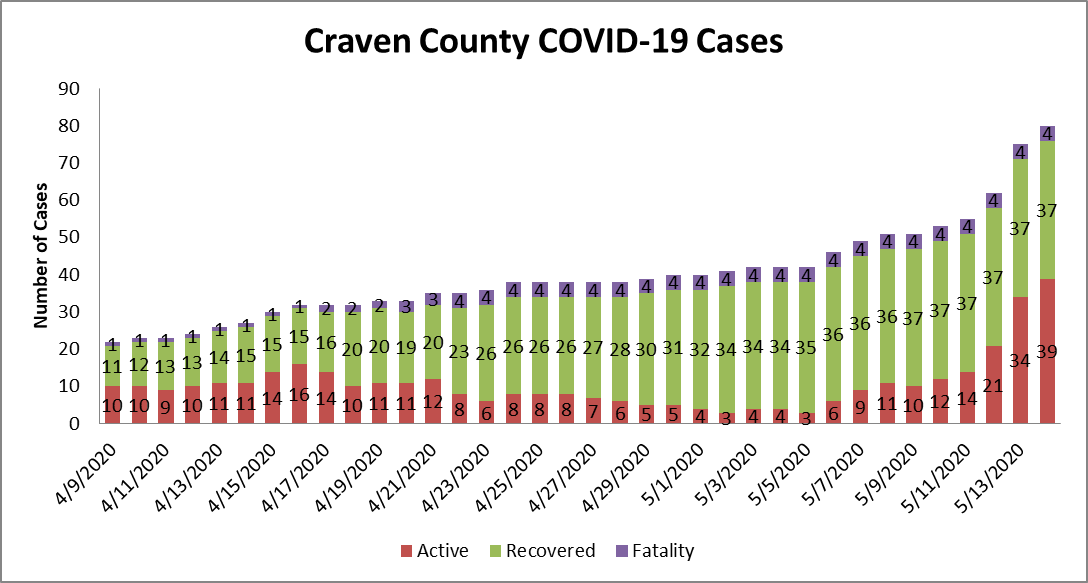 Note: As you review the data, please be aware this data is preliminary and may change as cases are investigated. Percentages may not sum to 100% due to rounding. Also, the data is representative of the confirmed cases, not of all COVID-19 cases in Craven County.

This site uses Akismet to reduce spam. Learn how your comment data is processed.